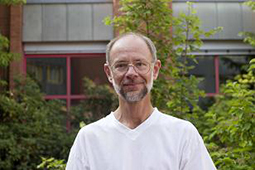 Lothar Kador studied Physics at the University of Bayreuth (Germany). He received his Diploma and Dr. rer. nat. degree in Physics with Prof. Dietrich Haarer in Bayreuth. After a stay as an IBM world trade visiting scientist at the IBM Almaden Research Center in San Jose, California (U. S. A.) in the group of Dr. W. E. Moerner he returned to the University of Bayreuth to obtain his Habilitation in Experimental Physics. Since 1996 he has held the position of an Akademischer Rat / Oberrat in Bayreuth. In 1998 he was a visiting scientist at the ETH Zürich in the group of Prof. Urs P. Wild.In 2001 Lothar Kador was appointed außerplanmäßiger Professor (apl. Prof.).Lothar Kador is a member of the DFG Collaborative Research Centre (SFB 481), and he participates in the Elite Study Program “Macromolecular Science”.

Lothar Kador has experience in various fields of optical experiments. One of his working areas is the holographic investigation of block copolymers for data storage applications, and he runs a holography laboratory in Bayreuth. Other working fields are high-resolution optical spectroscopy of the solid state, in particular single-molecule spectroscopy, as well as confocal microscopy, Raman microscopy and fluorescence lifetime imaging microscopy (FLIM). Besides he is involved in semi-empirical molecular-orbital calculations.